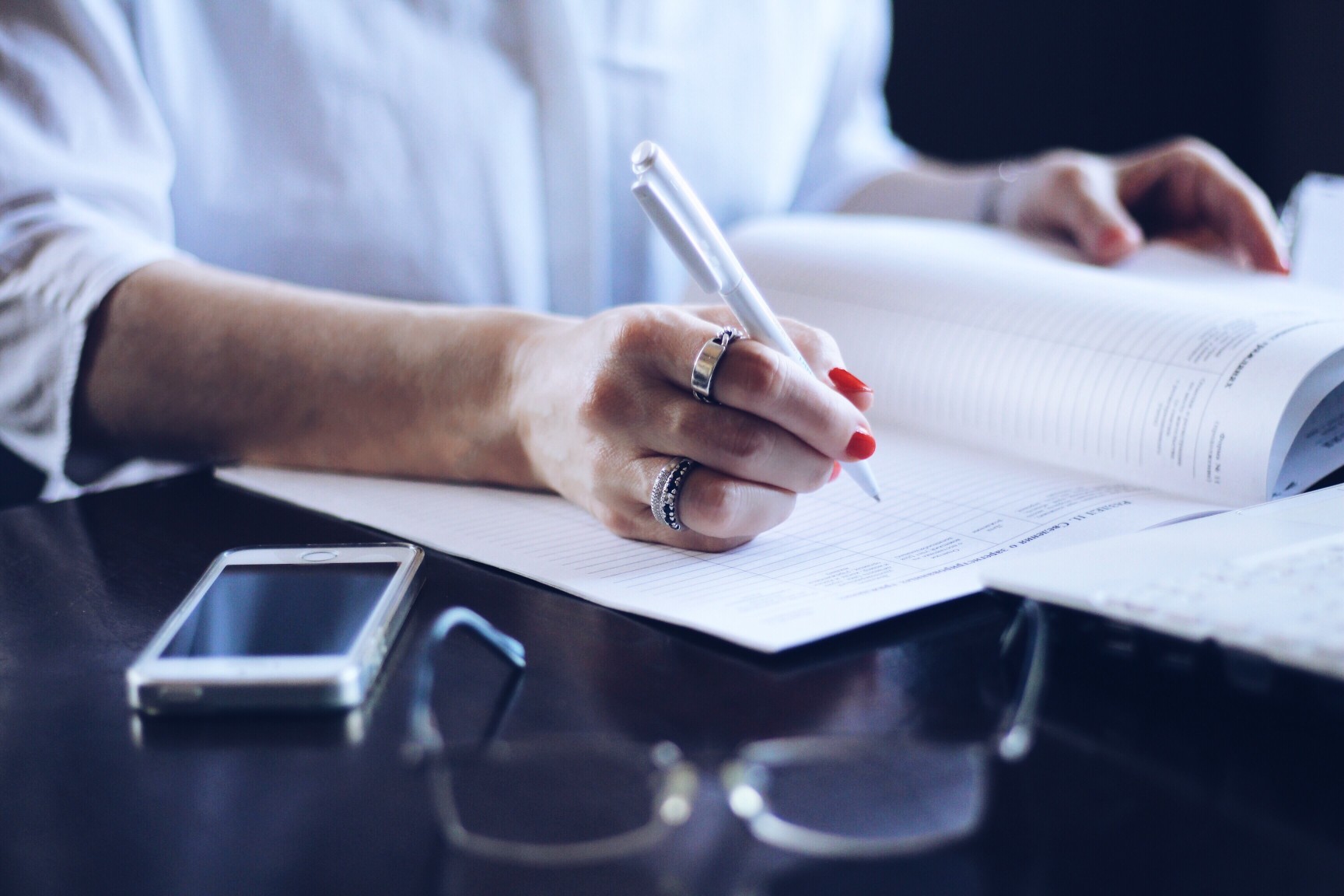 A Brief History of Open Enrollment

It's that time of the year again: open enrollment. This means that HR will have their hands full trying to get employees to sign up for their healthcare plans and other benefits packages.

This period of time is so ingrained in our modern business world that it seems like it's always been there, right? Every year, around November - give or take a few weeks here and there - open enrollment season kicks off like clockwork.

But where did open enrollment start? There had to be a catalyst to get all of this moving forward, after all. 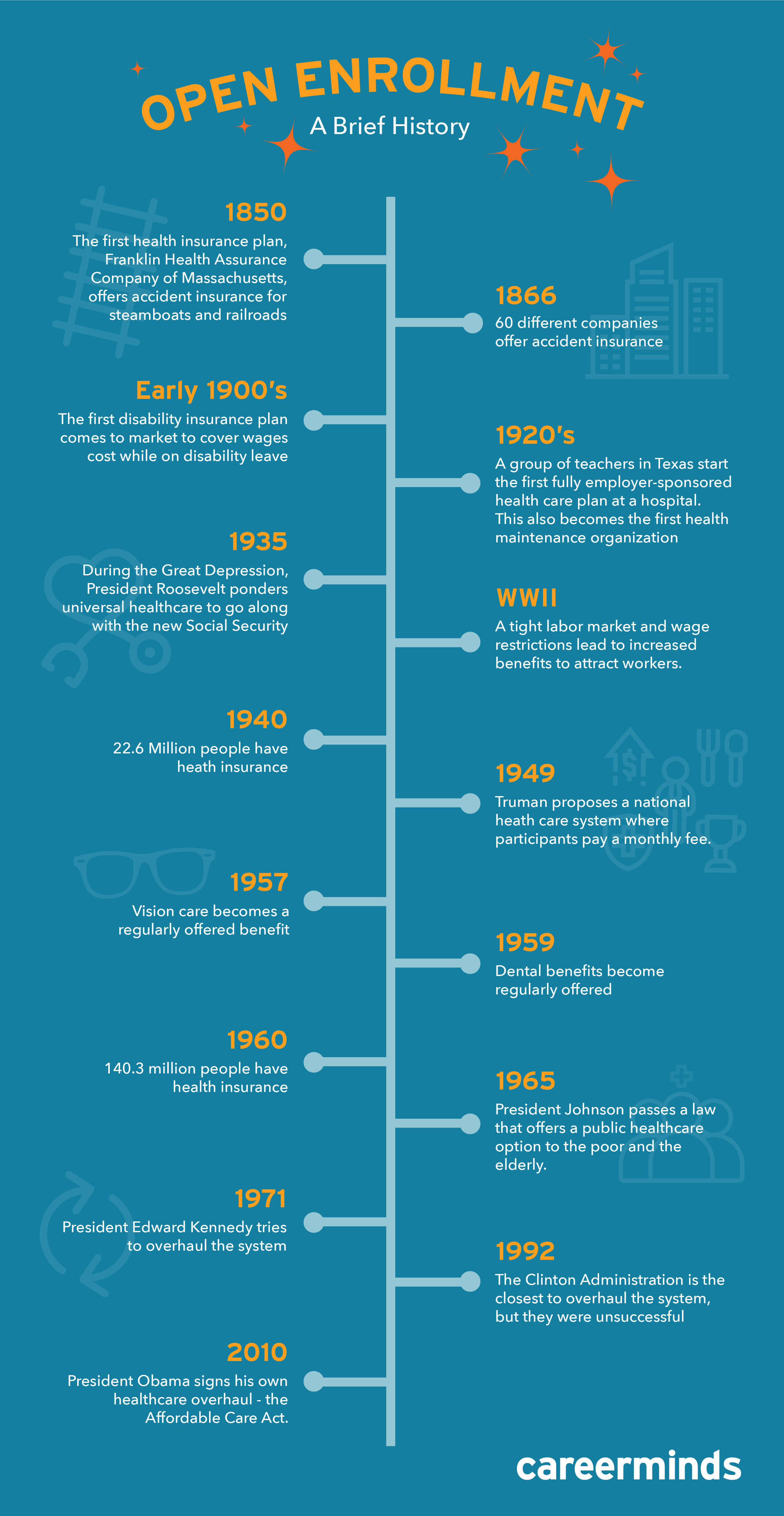 While modern health insurance plans can be very confusing with the amount of options a person has to chose from, back in 1850, there was quite the opposite problem: no health insurance at all.

That is, until the Franklin Health Assurance Company of Massachusetts came around and started offering accident insurance. Even though this was an actual insurance plan, it only existed to cover two specific things: railroad and steamboat accidents.

Given that both of these professions were incredibly dangerous, it makes sense that a company would want to support workers who couldn't perform their job duties because of accidents on the job.

During this time, insurance was a lot different than it is today. Basically, insurance existed primarily to cover injuries and things like that that occurred on the job. For example, in the early 1900s, the first disability insurance plans came on the market. However, they didn't cover medical bills. Instead, they helped cover wages lost while on disability.

In a way, insurance plans were more concerned about helping people financially when they couldn't work. To get actual treatment in any form, people had to pay out of pocket.

It took until around the 1920s before a full-blown employer-sponsored healthcare plan came about thanks to a group of teachers in Texas. This plan only worked at a specific hospital and only covered those that were in the group together. If this sounds familiar, it's because it was really the first health maintenance organization (HMO).

In some industries, like mining or steel, the company had their own doctors on staff for employees to visit. There were also union-operated clinics and things of that nature. Even so, the idea of popping into your PCP every year for a check-up was unheard of. Everything was basically put in place to treat whatever happened to workers on the job. Preemptive care and health maintenance didn't kick off until must later.

The Great Depression and the Rise of Employer-Sponsored Care

What really kicked off the type of health insurance that we know today was two-fold. First, in 1935, during the throes of The Great Depression, president Franklin D. Roosevelt toyed with the idea of creating universal healthcare, attaching this plan to his newly crafted Social Security.

Though Roosevelt really wanted to add this plan as part of Social Security, he was met with a lot of pressure from the American Medical Association and other opponents of the plan. In the end, he decided to push forward with Social Security without universal healthcare because, in his mind, he would never get both passed.

While this gave us Social Security, it also showcased the true need for Americans to receive some sort of assistance for their costly healthcare bills.

"In the grips of the Great Depression, many were hard pressed to find money for essentials like food and shelter. Healthcare often fell by the wayside for families working to access the basic necessities of life," reports Griffin Benefits. 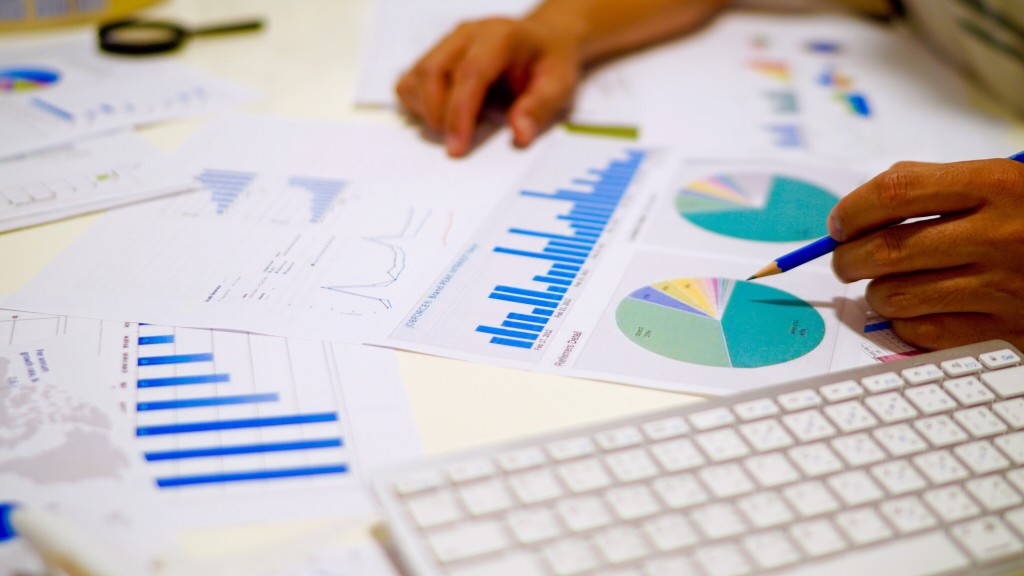 "Into this environment came the beginnings of private health insurance, with Blue Cross and Blue Shield plans paving the way for private insurers to begin crafting plans to meet the needs of the growing market. Still, at this stage, employers were not generally in the picture, and these original health insurance offerings were purchased almost exclusively by individuals."

Then guess what happened. A world war broke out.

While there is a lot of talk about how people in the homeland helped the war effort, one HR-related tidbit never seems to be talked about: the tight labor market.

Just like in today's strong economy, companies during WWII faced a talent shortage. You had tons of troops deployed around the world, taking away a lot of the labor force. And, at the same time, you had a need for a massive amount of goods to support the war effort.

This meant, in short, that companies were trying to figure out ways to attract and retain workers. Hampering this was the fact that the federal government imposed wage controls, meaning that companies couldn't offer a higher salary to attract individuals.

Then, a shift occurred. The War Labor Board decided that fringe benefits - sick leave, healthcare, and other things of that nature - didn't factor into wages. This meant that companies could offer various benefits and compete with one another to establish the best benefit system to attract the most people.

The need to stand out to attract workers made many companies increase their benefits by a whole lot, giving way to what we have today. In fact, because we are also in a tight labor market right now, we see this happening in real-time. Employers are coming up with an abundance of ways to pull potential employees in, though healthcare benefits have gone from a perk to basically being a requirement for any organization of a given size.

In 1949, another push for universal healthcare came up when president Harry S. Truman proposed a national healthcare system that would allow anyone to join and pay a monthly fee. In this plan, healthcare coverage was covered completely, it was completely optional to join (so that people could stick with their current plans if they wanted to), and the US government would pay for the services of doctors who joined.

Of course, like with anytime this sort of thing comes up, powerful organizations pressured Truman to drop it. 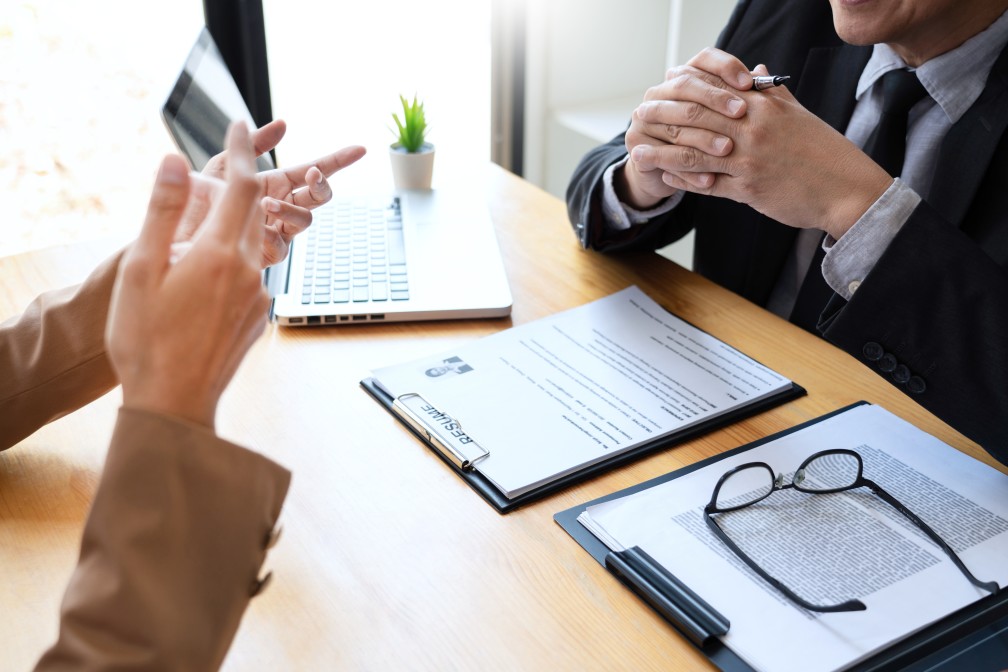 Even without a national plan in place, employers in both the private and public sector still continued to use benefits as a way to attract talent. The result? It's best to look at some numbers. According to reports, in 1940, about 22.6 million people had health insurance. 20 years later, in 1960, 140.3 million people had insurance.

That's a huge increase and it wasn't going to stop there.

Before we jump straight into how health plans increased, we must first take a detour to understand one of the biggest issues with the current plans that operated in the 1950s and 60s.

While many people enjoyed their healthcare coverage, there were two groups that were seriously struggling: the poor and the elderly. In fact, elderly people - many of whom were unemployed - didn't have access to these employer-back programs. So, when they had to go to the doctor, they ended up paying through the nose.

This was an obvious flaw of the system that kept the most vulnerable people in our society from receiving care. Enter: Medicare and Medicaid.

These new plans, which offered a public healthcare option to the poor and elderly, was passed into law by president Lyndon B. Johnson in 1965. Now, there's a lot more history to discuss here about how both systems were put into place. But that's for another time.

While the plans only offered coverage to the poor and elderly at first, Medicare eventually started supporting those with disabilities, renal diseases, and ALS. Basically, these two systems helped patch a blind spot that wasn't being addressed by the employer-sponsored plans. It's also the first, and basically only, time that a national healthcare plan truly made it into law.

These plans also helped another group: retirees. After all, since most plans were attached to employers, retirees - who now no longer work - had to pay of out pocket, which created a need for them to acquire some sort of national plan as well.

Unions and the Increasing Healthcare System

From around the 1950s and up, healthcare plans started to get better and better. This is primarily due to labor unions who fought to get workers better covered. For example, in 1957 vision care started to take off. Then, in 1959, dental benefits came along.

While the healthcare system drastically changed for the better over the course of half a century, many people still thought it could be better. And they still do to this day.

Many politicians - such as Edward Kennedy in 1971, Richard Nixon, and Bill Clinton - had their own plans to overhaul the healthcare system. As you probably know, all three of these individuals weren't unsuccessful.

The closest, before President Obama, was the Clinton administration, which in 1992 and 93 fought to completely overhaul the system.

"By 1993, Clinton's plan died in Congress, largely because it was considered too radical an overhaul of the healthcare system," Griffin Benefits reports.

"This left the major portion of healthcare still in the hands of employers. To deal with the growing number of employers who were dropping coverage because of rampant inflation, the HMO as we know it today was born."

This sort of paved the way for other changes, especially because most people were - and still are - upset with their options. In 2010, president Obama signed into law his own healthcare overhaul - the Affordable Care Act - which, as you most likely are very familiar with - was met with and is still met with a lot of criticism.

So Where Did Open Enrollment Start?

We kicked off this article by posing that simple question. And, even after all of this, it's unclear when open enrollment in its modern form truly kicked off. We can, however, take some educated guesses.

Given that employer-backed programs started in earnest as a response to the tight labor markets during WWII, it stands to reason that this is when employers started having open enrollment talks during the end of the year to establish their workers for the next year.

This is speculation, but it makes a ton of sense. And as you can tell from the history of healthcare, everything sort of happened organically and was kind of all over the place for a really long time.

In today's world, we've basically standardized the process. In reality, though, healthcare coverage has always been a fiercely debated topic that continues to evolve even to this day. This is likely why open enrollment time is hard on HR and businesses in general.

You have so many people with so many different needs and wants, it can become a fool's errand to attempt to solve them all. Explaining the plan options in and of itself can be a battle.

But, when you take a step back, we've come quite a long way. It will be interesting to look back 50 or so years from today and see how far we've come again.