Everything You Need to Know About the Skills Gap Crisis

Workers across the US and beyond are all facing the same problem: their current skills are no longer meeting the requirement for new jobs, putting their future careers in jeopardy.

This, in short, is the basis for what many call the 'skills crisis.' It's basically a way of describing the fact that many jobs that are coming onto the market require a skill set that many workers - who are typically in adjacent jobs - simply do not have.

The skills gap poses problems for everyone. Employees, obviously, need to work to survive and, in order to do that, they have to somehow come up with a way to learn new skills or take a job elsewhere and completely change their career path.

For employers, it comes down to simple business math: do they layoff and hire new employees (likely ones that require a bigger salary) or do they retrain workers for the future?

For many of the US's biggest companies, they have opted for the latter, choosing to invest in their current workforce instead of drafting an entire new one.

This process is called 'reskilling' or 'upskilling.' No matter what term you decide to use, they all mean the same thing: retraining workers for the future.

As you can see, all of this can get quite confusing. There's a lot of jargon and a lot of history here to explore. To that end, we have decided to take a step back and look at what exactly the skills crisis is, what it isn't, what some companies are doing about it, and - finally - where all of this might be going.

Let's start where all stories do, at the beginning.

While AI and automation have seen a giant upswing over the last few years, causing many workers and employers to wonder how many jobs the robots will steal from honest workers, technology has always killed off jobs.

For example, look no further than the First Industrial Revolution. We won't go into a full-blown history lesson here, but the first revolution involved going from hand-crafted goods to manufactured goods. Experts say that just about every aspect of life was changed by this shift (this sentiment is echoed today about AI, too).

Workers had to learn new skills, move from rural areas into more urban ones, and incomes rose, leading the standard of living to increase with it, which - in turn - led to a rapid growth in population.

Back then, if we could hop in our time machine and talk to people, workers were most likely excited and scared out of their minds. After all, everything just changed. How is a farmer supposed to understand how to work a steam-powered machine?

Since this first revolution, others have followed suit. Skipping ahead, researchers now believe we are about the enter the Fourth Industrial Revolution, also known as Industry 4.0 (there's always 'something-point-oh' when tech is involved). 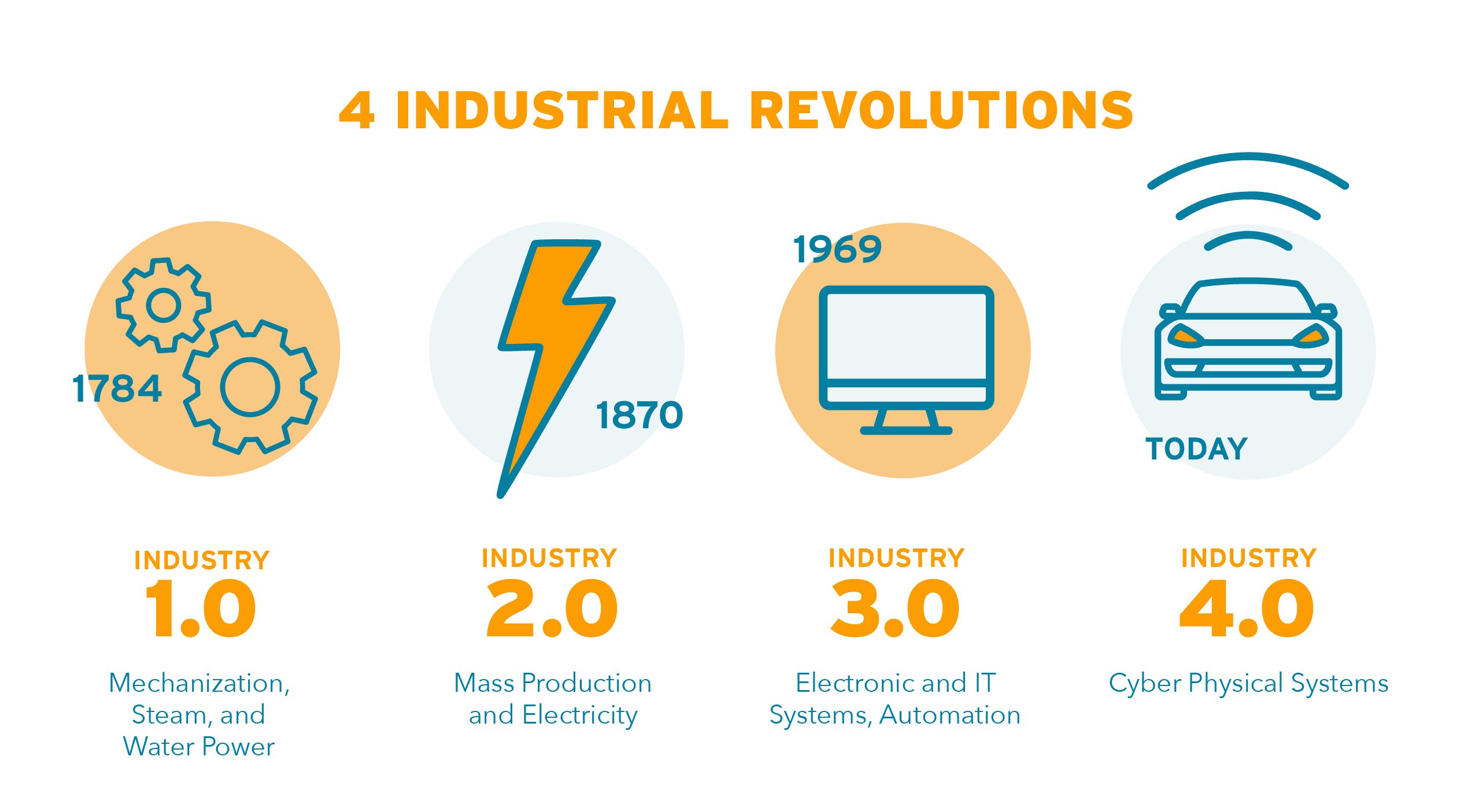 "The Fourth Industrial Revolution describes the exponential changes to the way we live, work and relate to one another due to the adoption of cyber-physical systems, the Internet of Things and the Internet of Systems," reports Bernard Marr for Forbes.

"As we implement smart technologies in our factories and workplaces, connected machines will interact, visualize the entire production chain and make decisions autonomously. This revolution is expected to impact all disciplines, industries, and economies."

Now, just like back in the early 1800s, workers are fearful of what the future may bring. Will a robot replace them on the factory floor? Will AI make entry-level tech jobs obsolete? Will blue collar work slowly decline altogether?

However, instead of simply seeing this on the horizon or shifting to it quickly, this revolution is happening slowly and in the public eye.

Workers and employers alike understand that jobs will, in fact, change. But what will this change actually entail? And, more importantly, what can we do right now to make sure workers have the skills to meet these new demands?

The fact is that technology will always disrupt our working lives. But, based on every other revolution, it seems unlikely to kill off human labor. Instead, new jobs - ones that we may not even be able to comprehend or plan for - will emerge and workers will adapt to them.

This time around, though, employers are trying to be prepared.

Buy or Train? The Core Question

The current tech shift, which has been going on for sometime now, has brought up an age old question about what to do when workers start to lack the skills needed for their roles: do we layoff entire workforces or retrain them?

Nowadays, if the current trend with some of America's biggest businesses are anything to go by, the answer is the latter. Instead of going through the costly process of rehiring people and training them all over again to fit inside the organization, employers have - almost across the board - decided to come up with ways to reskill workers for the future.

One of the prime examples of this is Amazon. While many view Amazon as a tech company, they have thousands upon thousands of workers who do other activities that have nothing to do with computers or algorithms or any other Silicon Valley buzzword. They have a huge shipping wing that handles everything from warehouse fulfillment staff, truck drivers, and delivery personnel. They also have a massive amount of support staff and a slew of other departments that we generally don't hear a lot about.

If their newly launched reskilling programs are anything to go by, Amazon may be in the midst of trying to completely automate some of these processes, specifically the warehouse fulfillment roles. These types of jobs are prime candidates for AI and robotics, meaning that thousands of people are working jobs that may simply not exist in the near future.

To combat this, Amazon has made efforts to transition these workers through upskilling initiatives to move them into more tech-heavy, future-proof roles. Sure, they could have laid all of these individuals off, but they decided not to.

This type of investment can be seen across many different sectors. JPMorgan Chase, Pricewaterhouse Cooper, and a ton of other companies have all pledged similar things.

IBM, one of the leaders behind the AI revolution, has been talking about upskilling for what seems like forever. Given their place in the ecosystem, they fully understand how AI and tech will soon change the way we all work. Instead of doing nothing, they hope to march their workforce - and other workforces - into the future with new skills and roles.

The Labor Market Is Likely Playing a Role

While no one is outright saying this, the tight US labor market definitely seems to be playing a big role in all of this, too.

Right now, a common phrase you hear is that there are 'more open jobs on the market than there are people to fill them.' While this may or may not be the case - it reads like an over simplification of the facts - this type of thinking has many businesses trying to retain as much staff as possible.

To retain these individuals, companies must train them for different and future roles.

In short, many forces have come together to help businesses understand the power of investing in their people more now than ever. When it comes to employee engagement, satisfaction, retention, and growth, development can play a key role. If workers see that their companies are going to bat for their futures, they will likely be better, happier, more engaged workers in the end.

What the Skills Gap Isn't

Before we wrap everything up, we wanted to mention what the skills gap isn't. We know this sounds weird but there are a whole lot of articles online about how the skills gap doesn't exist.

And guess what. They're right. At least they're right in a specific context that is no longer valid.

What these articles are talking about when they mention the 'skills gap' is a debate that occurred about five or six years ago. Back then, researchers - and even government agencies - were all trying to figure out the answer to one problem: unemployment rates.

"The theory here was that high unemployment reflected a structural shift in the labor market such that jobs were available, but workers simply didn’t have the right education or training for them," reports Matthew Yglesias for Vox.

"Harvard Business Review ran articles about this— including articles rebutting people who said the “skills gap” didn't exist— and big companies like Siemens ran paid sponsor content in The Atlantic explaining how to fix the skills gap."

Despite all of these articles and think-pieces, the unemployment rate kept going down and down. Nowadays, as we just mentioned in the section above, it's extremely low, causing organizations to retain talent in fear of losing them.

So what was going on? According to Yglesias, new research points to the fact that organizations actually increased their job requirements on job boards when unemployment was high, causing there to be a false skills gap. When unemployment started to fall, these descriptions were changed to be more reasonable.

This is an interesting find in and of itself. However, when we talk about the skills gap here - and when companies talk about upskilling - they are referring to the actual skills gap that is occurring now or is right on the horizon. This skills gap will see jobs fundamentally change because of tech disruption, requiring companies to train and develop talent for the future of work.

The skills crisis isn't a new phenomenon. Every time there is a shift in technology, work fundamentally changes, forcing workers to adapt or find new roles. Now, however, the rate of change is, quite frankly, insane.

Labor intensive roles such as factory work or fulfillment are being completely automated, pushing these workers into roles that they never anticipated: tech heavy ones that require deep knowledge of IT, coding, and other skill sets.

This 'skills gap' means that many workers are on the brink of becoming redundant. In the past, companies would typically layoff these workers and hire other workers with more specialized skills.

Today, though, there has been a shift in thinking. Instead of hiring new workforces, organizations have decided to retain their existing ones by offering 'upskilling' or 'reskilling' programs that allow them to continue working with the company and prepare themselves for the future.

No one truly knows how big of an impact AI and robotics will be on the workforce at large, though experts are predicting that these technologies will impact every job in every sector over the next decade. It's impossible to know what jobs this shift will kill and what new jobs will pop up because of them.

Either way, it's a good thing that companies are putting their money where their mouth is to better prepare their workers for the future of work.